Do Over Month 3 Part II

I'm attaching an interview I did with my Grandmother about her time in OakRidge Tennessee. Her first husband was one of the people who helped build the Secret City. Yes, the Secret City, the one that was so much of  a secret back in the 1940s that even the President of the United States didn't know it existed. I don't want to go into so much detail about that here, because you can Google that and learn about it yourself. But, I was doing a research paper on the Secret City back when I was in college at Clayton State University and I knew that grandmother had been there, so I interviewed her about it. 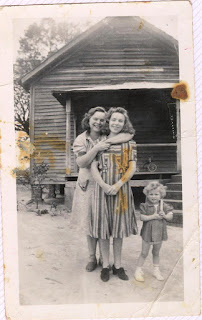 C= Carrie Goins. A= Angela Pendleton. S=Susie Hinote
Missing words marked with a _______
The interview is about Oak Ridge Tennessee during WWII, but she also talks about her husbands, kids, and present day events.

So, as with any great plans of mine, other things get in the way. I had been really excited to start over with grandmother's line. But here we are at the end of March and I am pretty much at the same place I was at the end of my last post in January.

You may be able to relate. I'm sure many of you have had other events get in the way of your hobbies. Or, you may just be too tired at the end of a work day to do anything other than sit down on the couch and watch a marathon of Supernatural on Netflix. (which is what I have been doing.)

In March Our Genealogy Group had our 5th Annual All Day Workshop.
But, it was also the time to do part 3 of Thomas MacEntee's Genealogy Do-Over.
In month 3 the topics were to conduct a self interview and to conduct a family interview. .

For my self interview, I originally thought I would just verify that what I had down in
Family Tree Maker
for me was correct. So, I checked it, and it is correct but, because, I'm not dead,
I haven't had any military service, we have no children, and I'm not religious so there is no baptism information stuff listed, it really looked empty.
My "self interview" felt lame.

I decided to conduct a "self interview" on the StoryCorps app. I'm not too happy with it either. I really like the app. The app itself is awesome. It really helps with conducting the interview. I just wasn't actually prepared myself to do it. So, that is on my "to do list".

I also need to get my family interviews done. There are several people I could interview about my grandmother's family. But there are some people I should interview for sure, that is my mom, my sister, my brother and my aunt. I think I will be bending the rules a bit, and I may be doing a family interview in June, as my aunt lives in Kentucky and I will be attending my cousin's wedding then. I hope she will feel like taking a bit of time for me. My sister and my brother, will not know anything more than I do, but, I would like to get their perspective.

Guess what, I did interview my grandmother several years before she passed. I have a small bit of one sitting here next to me. I asked her where she was when she heard about Kennedy being shot. She said she was at the dentist's office with my mom. She said a lot of people were crying in the waiting room. Grandmother wasn't crying. She was really embarrassed actually because mom was laughing hysterically because the dentist had her on laughing gas. The only thing mom remembers about the day, is that she got a Donald Duck coloring book at the PX.

Posted by Angela at 3:55 PM No comments:

I've started Thomas MacEntee's Genealogy Do-Over with my genealogy group. A complete do-over. I am researching as if I have no idea who my ancestors are.  I've written a synopsis on Month 1 tasks of the do-over on my genealogy group's blogspot page.

I have done a lot of research on dad's side of the family. Although, I wouldn't say it is up to par with other people's research. I would really like to do a do-over with that side as well. I have a BLOG for dad's father, Robert Stanley Hicks. But, I have significantly less on Grandmother Goins' family, so I've decided to do the do-over on Carrie Inez Wilkes and create a blog as I go along. 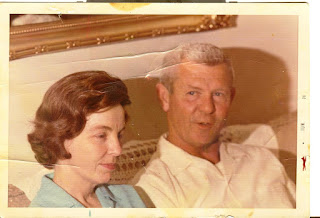 Grandmother and Pawpaw. Carrie Inez Goins and Harry Francis Goins.
On the back of this photograph it says to "Put in a frame for Angela, so she won't forget how we look".

I have my goal: Begin my maternal line. I'm starting with my grandmother, Carrie Inez Goins! But wait, one must always start with one's self. So, really I must start with me.

I have prepared to research. I have everything (EVERYTHING) put away. Things I know I have are grandmother's birth certificate. I think I have her marriage certificate. I'm not sure. (Good thing I'm doing it over!) . I'm going to research as if I don't have these things. When I need them, instead of going to vital records to get these things again, I'm going to "Angela's Vital Records Closet" in my office to search for that record.

Month 2's goals are to Establish Base Practices and Guidelines and Set Research Goals. I'm following Thomas MacEntee's Do-Over and reading his Do-Over Workbook . I like his base practices which are to

So, this blog will be one of the ways that I choose to track my work. I have Family Tree Maker on my computer. The tree is partially filled out, but I will simply start a "new tree" and resist the urge to look at my previous research. After all, my previous research is often a BSO to me, because I will forget some information I already collected, and when I stumble across it I get excited again!

I will make sure to cite my sources on my software and my family group sheets.

I'm ready to dive in! But I must slow down. The actual research doesn't kick in until month 4!!! We are about to start month 2. We are still preparing! I think I need to go organize the genealogy closet, and pull all the craft supplies off the genealogy boxes.

Posted by Angela at 9:50 PM No comments:

Angela
Angela graduated from Clayton State University in 2008 with a Bachelors of Arts with an interest in Archiving. During her undergraduate years, Angela spent two semesters as an Archives' Intern and is responsible for the organization structure of the University Relations Photograph Collection. Angela's passion is researching and collecting old photographs from 1845 to about 1920. Angela has presented programs to Our Genealogy Group on Using Google Earth in Genealogy, Stories in Stones, Identifying and Preserving Photos, Court Records and more. She is on the Steering Committee of Our Genealogy Group at Clayton State University.